Luxury carmaker, Bentley Motors, has lost in the Court of Appeal against small family owned company Bentley Clothing.  Bentley Motors had appealed the decision it had lost in the High Court last year.  (see https://www.bailii.org/ew/cases/EWHC/Ch/2019/2925.html.  By unanimous decision, Court of Appeal judges Lord Justice Arnold, Lord Justice Lewison and Mr Justice Marcus Smith, held that Bentley Motors had infringed the registered trademarks of Bentley Clothing by using the identical trademark on their clothing.  Bentley Motors was not allowed to appeal “honest concurrent use” and therefore it is not considered to have acted honestly with regards the small company’s rights.   It had also repeatedly tried, but failed, to force Bentley Clothing to cease trading by multiple attacks on its registered trademarks.

Bentley Motors must now stop using the trade mark BENTLEY and their combination sign, the word Bentley with the B-in-wings logo, on clothing.

Bentley Clothing repeatedly sought to resolve the dispute amicably.  But Bentley Motors continued to use their registered trademark and attempted several times, unsuccessfully, to cancel all the clothing company’s registered trademarks that go back as far as 1982.  The “ruinously expensive” legal costs forced the family to represent themselves in the Intellectual Property Office and one Director, Richard Lees, suffered a fatal heart attack in May this year aged 48.  Father and fellow Director, Robert Lees, has been battling duodenal cancer and was not fit to attend court. 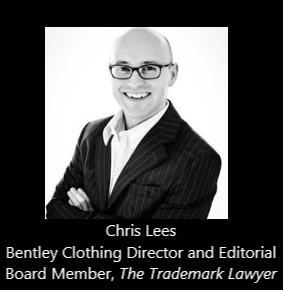 Luxury car companies have increasingly begun to market clothing because it can be seen as a potentially profitable venture and because it can act as a valuable marketing tool to maintain and entice new customers for the cars.  Bentley Motors will now be legally blocked from such ventures.

Bentley Clothing Director, Chris Lees, said,  “We’ve tried to grow the clothing brand we bought in 1990 and it’s proven impossible.  Bentley Motors forced us into a costly legal battle that has been ruinous in many ways.  We’ll be very glad when we can finally put a stop to Bentley Motors’ infringements and begin to grow our business to what it once was.”

Fox Williams fashion law partner, Simon Bennett said:  “This was a true David and Goliath battle and shows that the law protects brand owners from infringements even in situations where there is no equality of arms”.