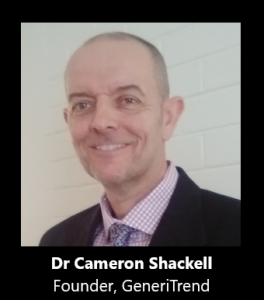 In a ground-breaking academic article, GeneriTrend Founder, Dr Cameron Shackell, points out a new type of genericness in trademarks involved in internet search.

Dr Shackell first reminds us that the trademark system exists to reduce search cost in the economy. He then notes that current US trademark law and doctrine was drafted to fulfil this rationale when firms with global power in search were unthinkable. Consequently, internet-based firms that have created exactly such services now bask in the protection of a trademark system whose function they have largely taken over. What danger does this pose to consumers? Dr Shackell illustrates the emergency with the following example:

Suppose a traditional trademark has become a generic term to some consumers–TYLENOL for acetaminophen, for example. What is the scope of the effect on those consumers? The distortionary effect is just on one category: pain relief medication… By contrast, what is the scope of effect on consumers to whom GOOGLE is generic to the same degree? By current judicial reckoning, the effect is likewise only in one sector: “internet search.” However, the real effect is across many categories because consumers use “internet search” to find and research many other marks. Their search for cars, hotels, food, entertainment, and real estate are also distorted. Thus, GOOGLE creates much more economic distortion at the same level of genericness because its effect on consumer search is multiplied by its intimate involvement with it. This potential is what differentiates the marks of internet search firms as “super-generic.”

To protect consumers and realign the trademark system with its rationale, Dr Shackell urges courts to lower the bar for genericness cancellation (“genericide”) in cases involving trademarks with economy-level relevance to search cost reduction. This argument, and others in the paper, may have huge ramifications for big tech. The GOOGLE trademark, for example, last survived a genericness challenge in 2017 and is considered by many to be already “somewhat generic”.

The paper entitled “Is genericness still adequately defined? Internet search firms and the economic rationale for trademarks” is online ahead of print in Science, Technology, & Human Values, a journal ranked in the top quartile of seven disciplines according to Scimago.

About GeneriTrend
Based on the academic work of Dr Cameron Shackell published in Artificial Intelligence and Law, GeneriTrendTM is a data science platform that formalizes and automates the process of determining if a mark is becoming–or has already become–a generic term. Dr Shackell, with degrees in economics, linguistics, semiotics, and artificial intelligence, is a leading independent authority on trademark genericness and is available for consulting and expert testimony.