Non-traditional trademarks typically include any type of trademark beyond a word mark, logo mark or logo with words. They can be registered provided that they are capable of both being represented in the register in a manner which enables people to determine the clear and precise subject matter of the protection afforded, and distinguish goods or services of one undertaking from those of other undertakings.

However, there are challenges to registering non-traditional trademarks. Shapes for example are often not considered to be inherently distinctive, as consumers will typically see them as decorative or functional, rather than as indicating the origin of the product. This means that even if you have presented a shape in a clear precise way, objections may be raised on the grounds that the mark is devoid of distinctive character.

Meanwhile it can be particularly challenging to register colors as trademarks as they are typically not considered to function as trademarks upon creation. It is possible to overcome objections however by gathering and filing evidence of use of the mark. 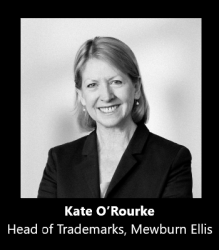 Other non-traditional trade marks examined in the report include sound, motion, multimedia and position (the specific way in which a sign is placed on or affixed to goods). The report also touches on other types of trade marks that have been the subject of registration applications, including smells and tastes.

“Non-traditional trade marks have been a growth area for many years and that looks set to continue as brand strategy becomes more sophisticated, particularly across the pharmaceutical and FMCG sectors but also elsewhere. Shape, colour and position marks are increasingly adding significant value to a brand. In some cases, consumers are coming to see those elements as indicating brand origin, a role that in the past was often performed solely by the brand name and logo.

“Any business now seeking to establish or protect a successful brand should be thinking in terms of these less-considered trade marks, as well as more traditional ones, if they want to stand out from the competition.”