The victories are a positive sign of China’s commitment to tackle counterfeiting and IP infringement in the toy industry. The cases include the first criminal judgment obtained by Spin Master for its popular PAW Patrol® animated series and the Chinese Supreme Court upholding a record patent damages award. The outcomes send a clear message that infringement of IP rights will cost infringers a high price.

The cases further represent a crackdown on substandard toy products produced by counterfeiters, which don’t meet safety certification standards and could endanger children.

The strong stances taken will have a lasting effect on the enforcement of IP rights in the region.

Supreme Court upholds award to Spin Master of US$2.4 million in damages

Lusheng successfully took action to enforce Spin Master’s patents for its award-winning Bakugan® toys in a patent infringement lawsuit against a major local imitator. The infringer’s ‘Monster Hunter’ toys closely mirrored the Bakugan series and, despite the infringer’s attempts to delay the case for a number of years, Lusheng successfully defended the validity of Bakugan related patents and ensured Spin Master’s IP rights were enforced.

The Chinese Supreme People’s Court upheld an award to Spin Master of CNY 15.5 million (approx. 1.8 million GBP or 2.4 million USD) in damages, in a decision that demonstrated the Supreme Court is willing to strongly enforce IP rights. It serves as a warning for local IP infringers that the rights of multinationals – whether toy producers or manufacturers of other products – will be enforced in China. 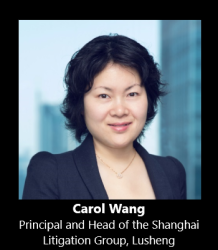 The IP firm also successfully filed criminal actions against counterfeiters across China, who had produced fake, unsafe toy merchandise for children, selling them under the guise of being Spin Master’s PAW Patrol goods.

Several local counterfeiters were raided by police, resulting in large seizures and detention and arrest of suspects. Two individuals have already been sentenced to imprisonment and fined. Prosecutions against other infringers are still undergoing.

Carol Wang, Principal and Head of the Shanghai Litigation Group at Lusheng, says: ‘The ability to uphold IP rights in China has been a concern for many multinationals, and the rulings on these cases represent a great victory for international business. It further shows how China’s judicial protection has been fair and non-biased when hearing disputes between one reputable international company and one domestic influential company.’

Lusheng Law Firm (“Lusheng”) is a Chinese law firm and strategic partner of Rouse. It specialises in Intellectual Property (IP) law and litigation. It is also a patent agency authorised by the National Intellectual Property Administration, PRC (CNIPA). With headquarters in Beijing, Lusheng provides top quality specialised legal and patent agency services to clients throughout China.

Consumers may purchase the PAW Patrol series and other toys developed by Spin Master through authorized distribution channels in China, including Toys “R” Us and Spin Master official online flagship stores in Tmall and other platforms.