Legal services firms operating a consultancy model are growing at three times the rate of mid-market law firms as a whole, according to new analysis1 by Arden Partners plc (‘Arden), the small and mid-cap investment bank.

The analysis, which looks at publicly available data between 2018 and 2020, analyses the growth of leaders in the legal consultancy space (Keystone Law, Taylor Rose MW, Setfords and Gunnercooke) against the entire legal mid-market (185 firms).

The findings reveal that firms employing a consultancy model have been growing both revenues and lawyer counts at a much faster rate than the entire market.

Consultant lawyer numbers have grown at a Compound Annual Growth Rate (CAGR) of 21%, compared to just 7% for mid-market firms.

Revenues amongst the legal consultants have grown at a two-year CAGR of 26%, compared to just 10% for the legal mid-market. The wider UK legal services sector has been growing revenues at 5% per annum, according to Arden.

Arden says its analysis provides an early indication of the accelerating market disruption being led by legal consultants. Last year Arden released a report predicting that the business model would become the dominant business model for the consolidation of high street and mid-market law firms, stimulated by the success of remote working during the pandemic and the benefit of significant investment in IT and back-office infrastructure.

The report highlighted how the Covid-19 pandemic became a catalyst for industry disruption, exposing the poor strategic position, inadequate management organisation, and outdated operating models of many law firms and changing lawyer mindsets. 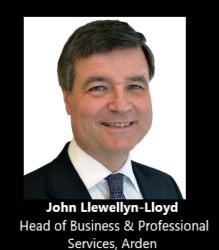 John Llewellyn-Lloyd, Head of Business and Professional Services at Arden, commented: “Our analysis suggests that businesses employing consultancy models are growing much faster than their contemporaries in terms of lawyer numbers and revenues. As further financial data becomes public in the coming months, we expect to see that this trend is accelerating.

“The consultancy model makes a very strong investment case for public and private investors with an ever-increasing market share, higher quality infrastructure, a great ability to recruit talent cost-effectively and a significant growth opportunity with such a fragmented and pressurised smaller mid-market legal sector.”

The legal consultant business model offers lawyers a central service platform, brand and management infrastructure from which to operate, in return for a percentage of the lawyer’s revenue. The lawyers themselves are self-employed consultants, who retain an average of 70 per cent of their billings, with the remainder taken by the consultancy firm.

Initially dismissed as either a passing trend or of minor consequence, doubts aimed at the legal consultancy model when it first emerged included its ability to attract high-quality lawyers and improve low margins in a model where profit is given up in the pursuit of scale and expansion.

However, the operating model has gained acceptance from lawyers, clients and financial investors, and has now become much more mainstream. Areas where consultancy firms were originally derided, including the implementation of sophisticated practice management systems, a preference for remote working and a focus on “self-service” by efficient fee earners with a reduced number of support staff, have increasingly become a competitive advantage.

Arden says the high growth of legal consultancies will enable them to attract investment more successfully than their peers following purely traditional models.

It says the factors that make them more “investable” propositions include:

THE ONES TO WATCH: LEADING LEGAL CONSULTANCIES – Corporate & Consumer

In a nutshell: Pioneer of the consultancy model and named Law Firm of the Year at The Lawyer Awards 2020. Keystone’s growth of revenues and lawyer numbers has demonstrated the ability of the consultancy model to win and retain clients against established firms. Since it listed, investors have recognised the potential in Keystone’s model with its share price increasing significantly and a valuation at a significant premium to its listed peers. With consultants also operating in Australia and the Middle East, further international expansion of the business is an interesting proposition to achieve scale

History: Founded in 2009 as Taylor Rose Law, it has since successfully undertaken several mergers.

In a nutshell: Fast-growing consumer law firm with a leading presence in conveyancing as well as private client and family law. TRMW combines its fast-growing consultant division, which it says has doubled in size in the past year and is adding 15-20 consultants per month, with a traditional practice with 500 employees. It uses the two sides of its business in tandem successfully, enabling its consultants to benefit from referrals and greater marketing and new business firepower, in turn attracting bigger contracts and helping talent retention. It has consistently invested in its platform to great effect; and it is a well-practiced consolidator.